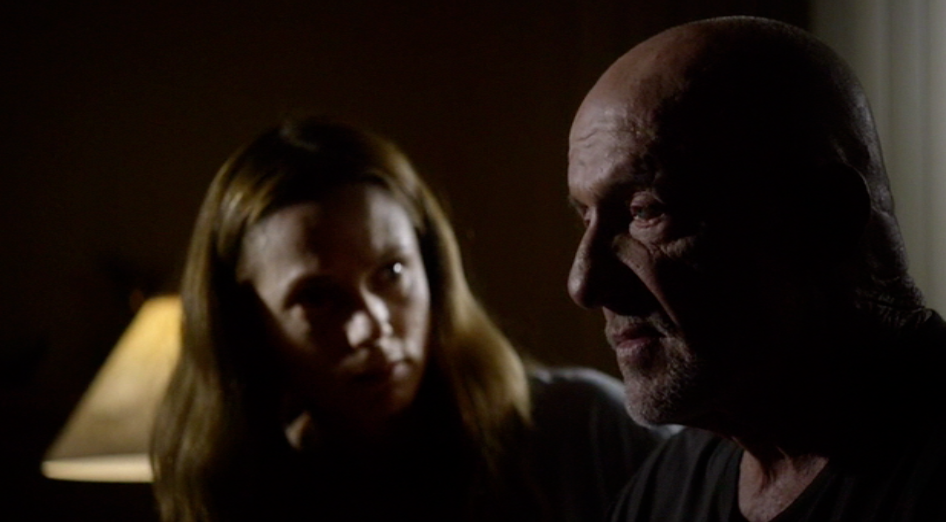 “Five-O” is an episode of Breaking Bad in all but name. In fact, it plays like a one-off side story that feels of a piece with the source material, moreso than Better Call Saul does. While we know this isn’t true, would it be at all surprising if we found out that this was an old Breaking Bad concept, dusted off and given a second chance?

Throughout the course of Breaking Bad, we flashed back to see the characters in different, more innocent contexts. Walt and Skyler buy a home. Jesse builds a box in wood shop. Gus loses somebody close to him to the cartel.

Even within the timeframe of the show, we’d often flash back to things that must have happened while we weren’t looking. The show was unfolding around us, but we were elsewhere at the time. So we’d end up with a short scene of Jane taking Jesse to the Georgia O’Keeffe museum. Or Gayle building the superlab. Or Tortuga at the bar. All of these things happened after the respective characters were dead and gone.

On Breaking Bad, death was the end. There were no miraculous recoveries. There was no escape. Saddest, perhaps, was the fact that there was no mourning.

And yet echoes carried. One of my favorite things about the show was the fact that we could trace every one of Walt’s problems in the final episodes all the way back, logistical step by logistical step, to decisions he made in the first episode.

Everything snowballs. A bullet to the head takes your life, but not your legacy. There’s a part of you left behind. A kind of ghost that lives on in the inescapable causal slide that you once set into motion. It continues long after you’re gone. It never stops. Death is the end for the dead…but not for anyone else.

Breaking Bad loved to fill in the gaps. Even — perhaps especially — those that didn’t actually need to be filled in. It was an excuse, and a welcome one, to spend more time with these characters. As a necessary result, we learned more about them. They felt more real.

And yet two major characters never got that flashback treatment. Two of the show’s best, and richest. Two that would be high on the list of everybody’s favorites:

While Better Call Saul gets to chart with however much depth it pleases the rise and fall of Saul Goodman, Mike is still an unknown…a creature of inference.

At least, he was. Better Call Saul gives Mike the overdue Breaking Bad treatment, flashing back to a formative moment, and giving us insight into why the character we’re listening to is the character we’re listening to. Through no kind of coincidence, the episode is called “Five-O.” While that refers to the police that drive the story, it’s also an echo of Breaking Bad‘s pilot episode…which was originally called “Fifty.” The titular character of this show also makes what’s essentially a cameo…further echoing Breaking Bad, in which Goodman would be called in for a scene or two and then dismissed so the plot could proceed without him.

In other words, we’re in old, familiar territory. It’s the story of Mike breaking bad.

It’s also a reminder — as if anyone could possibly need one — that Jonathan Banks is an absolute treasure. Front to back, “Five-O” is his episode. And he doesn’t squander one second. The closing scene, in which his dry rasp gives way to a painful break, reveals a tortured and damaged soul. The worst part? He inflicted those wounds himself.

The story is simple, and nothing about it is shocking…nor do I believe anything could qualify as a twist. We see the entire thing playing out. We know what’s coming. We’ve already been told. “You know what happened,” Mike says. And we do. We know it before it gets here.

The agony and the tension is in the waiting…and yet it doesn’t dissipate when a gun goes off. If anything, it somehow manages to ratchet up further, until the most harrowing image in a story of murder and revenge is one of an old man, sitting on a couch in the dark, admitting he failed.

When we met Mike in Breaking Bad, he made an immediate impact. My girlfriend and I talked about the character well before we knew his name. (We called him The Cleaner.) Before long we got some sense of what made him tick (his granddaughter), his history (the half-measures speech), and his internal code of ethics (continuing to pay Gus’s chain of operatives after the operation itself is no more).

But all of these things were glimpses. Flashes of a deeper humanity in what was essentially the world’s most badass grandpa. We didn’t need to humanize Mike, because we liked his broad strokes plenty.

We liked Mike because he was intelligent, he was funny, and he got things done. He was comic relief at the same time that he was threatening (quite believably) the lives of characters we’d known much longer.

Perhaps the fact that we knew so little about who he was is what endeared him to us. Could we really dig into a decidedly dangerous fixer/assassin and find something relateable?

“Five-O” says sure, of course. Why not? Whatever Mike was, at any point, he was somebody else before that. Just as Saul Goodman was Jimmy McGill (a fellow transplant, it’s worth noting), Mike was Officer Ehrmantraut. He was good at his job, and raised a son that was perhaps even better at his. And before poor, unseen Matt (the ghost in the inescapable causal slide of this episode) meets an early end, Mike forces him to compromise his morals.

It might have been a no-win situation. Matty, as he was called, could well have been shot by his partner anyway. But what happened — what Mike made happen — was worse, simply because he had a hand in it.

He tried to help, which was worse than not helping at all, because now he feels like a failure. And his son — and a husband and a father…and a good cop — is gone.

That’s what weighs on Mike’s shoulders. Those are the chains that bind him. That is the tragedy that locked him up inside.

Mike’s relationship with his granddaughter was one of Breaking Bad‘s sweetest (and therefore saddest) threads. I don’t think we needed backstory for that; it was emotionally meaningful on its own. But knowing, as we do now, that the reason she needs to be provided for at all is because Mike — in his mind — got her father killed…well, that’s heartbreaking. That’s why he did all of the worst things we saw him do in Breaking Bad. The money he left her wasn’t an atonement…it was an apology.

Of course, by the end of Breaking Bad, that money is seized, and the little girl never sees a cent of it. The odds are good she wouldn’t even know about it. He failed his son, and failed his granddaughter. The tragedy of Mike Ehrmantraut is that he wasn’t The Cleaner. He was a human being.

“Five-O” is a spotlight on one of Breaking Bad‘s strongest actors…one I never would have thought I needed. In fact, I’m still not sure I needed it. And yet…I’m glad to have it.

This is the episode of Better Call Saul I’d be likely to watch most often. It’s a perfect, simple tale, filtered through the hardening heart of a man who wishes more than anything that he could undo the damage that he did. Damage that would likely have been done anyway.

It’s the sad beginning of a new life for Mike. It’s a chance to start over, and do things right. Which is the first step to losing it all.