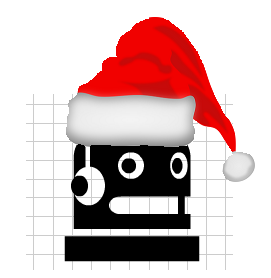 Well, it’s the middle of June, which means everyone’s thoughts are turned to the holiday season. Or maybe I’m just insane.

Either way, I’ve been working on some ideas for this coming year’s Xmas Bash!!, which is bound to be a good thing, as it means I won’t go nuts trying to slap something together in the hours before the stream is supposed to go live.

With this much time to plan, I figured I’d open it up to viewer feedback.

For those of you who haven’t attended either of the past events, the Noiseless Chatter Xmas Bash!! is a live-streamed charity event. The main feature is a surprise assortment of horrible (horrible…) Xmas specials that I’ve unearthed for the sole purpose of making you hate television. There are host segments, music, and other goodies throughout. Last year I added some vintage toy commercials to the mix, and opened up donations to The Trevor Project as well. Oh, and, through it all, there’s a chatroom, which I think it’s safe to say ends up being more entertaining than all of the specials combined.

This year, I’d like to make it even better. I have a few ideas of my own (which won’t be spoiler’d in this post), but I want to hear from you, the folks who will actually be attending. And, hopefully, some of the folks who haven’t attended.

In a comment below, let me know the following:

If you’d prefer, for any reason, that your response not be public, drop me an email at reed.philipj at gmail dot com.

Your feedback is strongly appreciated, and thanks again for making these past two years such an awesome success. Judging by the specials I’ve dug up for this year, I think we’ve all got great, great, terrible things to look forward to together.

I’ll see you there!