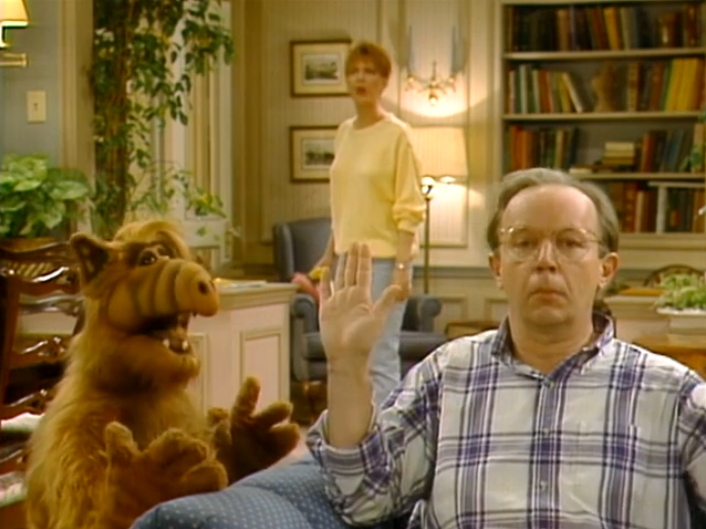 A guest submission today from Justin B. Justin commented a few weeks back about having some insight from Bernie Brillstein, and I’ve asked him to expand his thoughts into a full post. I hope you enjoy. This also buys me another week to figure out how to make “Baby Love” interesting, so I’m not complaining…

ALF has always fascinated me, though the reasons for that fascination have varied quite a bit. As a child, I was naturally amused by ALF’s catchphrases and tendency to eat the family pets. Later, upon reevaluating the show in college and as an adult, what I found interesting was just how truly terrible the show was and always wondered why it was so bad.

There are so many shows from that era which hold up and continue to be just as funny today. There’s a reason why The Golden Girls, Fresh Prince and Seinfeld are consistently some of the most valuable syndication properties – the humor holds up. ALF on the other hand is truly a lazy show. Other than the fact he ate cats and was from outer space, I think most viewers would be hard pressed to think of anything else memorable about it.

Certainly nothing about the supporting characters (truly a set of people nobody cared about developing), the plots (unoriginal recycled material from previous sitcoms), or the production quality (it was made for like seventeen dollars; insert obvious joke about Max Wright getting paid in crack and hobos). Just about the only impressive thing was the puppetry involved in bringing the main character to life. Max Wright claimed in an interview years later that he once saw ALF blush. It really was a very emotive little puppet.

Later, once I moved to LA and got involved in the industry, I was lucky enough to spend a bit of time with Bernie Brillstein, who packaged the show and helped sell it to NBC. He was credited as an Executive Producer on the series. Prior to ALF, his career was legendary managing many luminaries and developing classic shows like Saturday Night Live, The Muppet Show and NewsRadio. In film, he did Ghostbusters, The Blues Brothers and many more. One of the things I had to ask him about was ALF, which was brought to him by Paul Fusco in 1984.

When Fusco pitched the idea, ALF (the character) was basically a Don Rickles puppet. The fact he was an alien was secondary. Fusco’s humor was “as mean and nasty as humanly possible.” Brillstein found the idea hysterical and very different from what Henson was doing with the Muppets, which he’d also helped sell. Since Paul Fusco had zero writing or showrunning experience, Tom Patchett was brought in to serve as Executive Producer, as he’d executive produced The Bob Newhart Show, along with Brillstein’s Buffalo Bill, as a way to lend some experience to the project.

They went to NBC in Burbank to pitch the series and upon explaining their idea were met with a lot of blank stares. Bernie Brillstein kicked Fusco under the table, who pulled out ALF from a garbage bag. The puppet proceeded to sneeze and wipe it off on Brandon Tartikoff’s suit jacket, then verbally attack everybody in the room. Show sold.

In trying to understand what the show became, the crucial aspect of the above pitch was that ALF was basically an insult comedian. Never was it about the family and how they relate to an alien house guest, but rather in Fusco’s mind the Tanners were simply a vehicle for ALF to offend, insult and injure.

Watching the show today it is impossible not to take note of Max Wright’s performance. It is beyond over the top. He’s one of the stagiest actors I’ve ever seen, especially as Willie. To be fair, he’s playing a straight man and delivering the world’s most boring dialogue to a puppet. It’s not an easy task and there’s only so much you can do.

Having said that, the early reviews of the series praise Wright’s performance. After all, it was the quality of his work landed him the role, without even having to audition. He had been in Buffalo Bill, where Tom Patchett had worked with him, in addition to an award-winning performance as Nazi doctor Josef Mengle and in Fosse’s classic All That Jazz. He’s even Tony Award-nominated for his role in Ivanov. The biggest problem for me is the lack of any substance to these characters. We know nothing about them and they serve no purpose in the show except to get ALF to his next punchline. It’s even worse with Lynn and Brian.

Naturally I asked Bernie Brillstein about all of this and he admitted that ALF is quite literally the worst casting he’s ever overseen. It simply did not work. There was no chemistry between the leads, the kids were not particularly good and by season four everybody hated each other with a burning passion.

Adding to this was the fact that an objectively funny script would come out on a Monday and by Friday, Fusco would have the writers take any funny lines the family had and move them to ALF, leaving everybody else with dreadful expository dialogue. It pissed everybody off, from the series regulars to the guest actors. Character actor Dean Cameron, who starred on three episodes later in the show’s run, echoed this in an interview he recently gave: “The scripts were really funny on Monday. By the time tape day comes around, ALF has all the good lines and the rest of the script is horrible. It was bumming me out after a couple of weeks. Imagine what it was like working on the thing for [four] years. Imagine.” Adding to this was the fact it took 20-25 hours to shoot a single episode.

There’s a legendary story which I’ve heard from two different people and was even discussed briefly on Howard Stern: By the end of season four, tensions were so high that Max Wright had a serious meltdown on the set. Who knows if it was chemically induced or not, but he began physically attacking the ALF puppet and screaming “PUT US ON STICKS! WE’RE ALL PUPPETS HERE!” Truly, truly a great moment.

The whole thing got so heated that it was agreed between the producers that should the series get a fifth season order the Tanners would be completely written out of the show. ALF would be taken to the “Alien Task Force” headquarters and the show was to become a McHale’s Navy– or Hogan’s Heroes-type comedy, set on a military base.

I’ll leave you with this gem of a Benji Gregory interview. It’s not my normal practice to mock twelve-year-old kids, but Gregory can hardly string a sentence together. Why in the world he was cast on a major NBC show is beyond me. I’ve always wondered if he was secretly a good little child actor and they just didn’t know what to do with him. That, thankfully, appears not to be the case. He had zero charm, except perhaps he could scratch his armpit on cue.