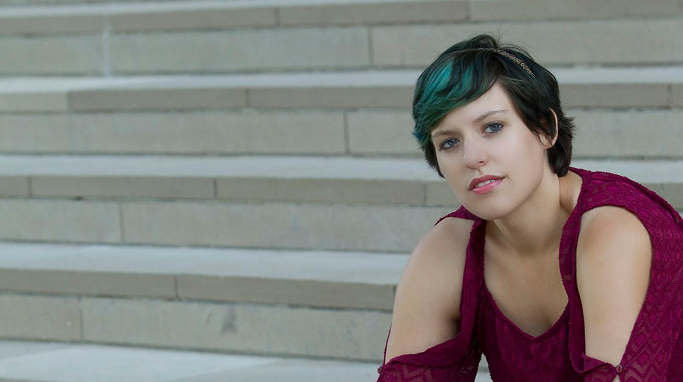 Over the next few days, we’ll be turning the spotlight over to the authors featured in the Arts in Entertainment series. This is your chance to meet them and get a sense of exactly why you’ll want to read their books. As of right now we are still south of 25% funding, but we can make it! Every dollar helps make a great series a reality, so please support the Kickstarter today to help it come to life. Here’s Catie Osborn to tell you about her book on Titus Andronicus, and to give you a taste of just how great a series this will be.

My life is complicated. I’m not famous, except in some small corners of the internet. My areas of passion and expertise are skills and trades that generally stopped existing 400 years ago. I’m going to grad school for Shakespeare and I have a blacksmith shop in my barn. I’m weird. But I am also extraordinarily lucky. I found the thing I love: Shakespeare.

The bummer about loving Shakespeare (and this may come as a shock to you), is that it turns out, most people think Shakespeare is awful.

I have learned this many, many times over. And it makes me sad. Somewhere along the line, people got told that Shakespeare is for Fancy People with Very Nice Monocles and that it’s hard to understand and that it’s boring.

I teach Shakespeare workshops all year long, and the most common complaint I get from people of all ages is that “this is boring and it’s a different language so how am I supposed to understand any of this?”

It is at that point that I usually bust out the first scene of Hamlet, which starts with the incredibly complicated Shakespearean text of “Who’s there?”, and after about an hour, people are usually at least someone convinced that this weirdo with blue hair and really large hand gestures isn’t at least completely wrong.

And so when the opportunity came along, I realized that this was my chance to make, perhaps, some sort of small blip in how Shakespeare is perceived.

Because I really do think Shakespeare is fantastically interesting and engaging — you just have to sort of learn it from someone that knows that. And I was exceptionally lucky in that not only did I first learn Shakespeare from a group of ridiculously enthusiastic people (more on that later), but I’m now in grad school with professors who are experts on teaching and researching Shakespeare, so I’m getting this weird sort of dual education in both how to be awesome at being excited about Shakespeare, but how to also not look like a total jackass whilst doing it.

Then I realized that to make this argument happen successfully, I had to tell the story of how it came to pass that I became such a Shakespeare nerd. Then it all spiraled out of control and I ended up with like 90 pages of….something and then I accidentally got a book deal and now here we are.

Also I figure now I can say that I’m the girl who wrote a book about Titus, which will ultimately lead me to my plan of world domination and authority in all matters pertinent to Titus.

There are shitloads of books about Shakespeare’s works, hundreds of biographies of him as an author and thousands upon thousands of articles about his plays — however, there are like two books that deal with Shakespeare as he relates to the author. And that’s the thing about Shakespeare. Yes, he was perhaps the greatest writer who ever lived, and yes, he was a really, really good poet, but none of that matters if his works didn’t make us feel something. You can’t write about Shakespeare without having a connection to Shakespeare, and that’s the part that most authors shy away from.

So I chose Titus Andronicus because it happens to be my favorite. It’s also, as I’ve said before, widely considered the shittiest one. Which is remarkably untrue if you’ve ever read Timon of Athens, but let’s be real, no one wants to read Timon of Athens. #shakespearejokes

However, Titus stands out to me more than some of the other (admittedly, better) plays because I think it is the one that so aptly illustrates the insane amount of both possibility inherent in the text and how god-awful Shakespeare can be. Fun Fact: Shakespeare is not always good. Sometimes, Shakespeare is really, really bad.

It is also is a great play for looking at Shakespeare. He’s very human in this play. He fucks up frequently in his writing and it’s kind of adorable. Characters mysteriously disappear, the comedy is awful, the main characters are obvious prototypes for later characters, but the structure is there. He’s starting the work of who he will ultimately become. It’s sort of like watching Howard the Duck and knowing that it will ultimately lead to The Avengers.

But, more than that, I wanted to talk about Shakespeare and Titus from my perspective. I’m in graduate school and I am currently writing my thesis (coincidentally) on Titus. I am totally capable of writing fancy-pants articles with impressive vernacular (and I would daresay that I enjoy writing them a great deal), but that doesn’t feel like the authentic me.

I’m really, really doofy. I once didn’t get hired for a job teaching Shakespeare because I was too excited. That’s a true story. So I wanted to make this book authentic. Because I honestly believe that you don’t have to know anything about Shakespeare to get excited about it, or even understand it. It’s not a foreign language, it’s not a mysterious code, it’s just….stories. Stories that still appeal and touch us (heh heh) today.

I’m not approaching this with the expectation that readers have any idea of what Titus is or what iambic pentameter is or why it’s important. Because it’s not about the scholarship, it’s about how Shakespeare shaped my life. And you don’t need to know rhetoric to hear that story.

In this book (Jesus Christ I’m writing a book), I’m going to narrow in on Titus because Titus is the constant Shakespearean presence in my life. If that’s even a thing. However, this book isn’t about Titus, necessarily. I’m determined to not make this a thesis. Because that’s not the thing that’s important to me.

I am from a medium-sized area of the midwest called the Quad Cities, which is a group of cities on the Illinois and Iowa sides of the Mississippi river. There are five cities that make up the quad cities because fuck your logic.

In the Quad Cities, there is a small theatre troupe called the Prenzie Players. They started as a group of friends who wanted to put on Shakespeare plays during the winter months, and being poor young adults at the time, they came up with the idea of using found spaces, simple staging and minimal costuming and tech. The focus, they decided would be on the text.

So they learned everything about it.

Their belief and mission statement is that “theatre is not a passive experience”. They talk to the audience, directly, often interacting with them, and use an ensemble directing style. They taught me to look, deeply, at the text– things like that the patterns in the text mattered, that things like repeating line endings meant something significant, and it was up to me to discover it

These are the people that taught me Shakespeare. The thing, though, is that these people aren’t Shakespearean scholars. They are parents and band teachers and yoga instructors and engineers and high school English teachers and microbiologists and waiters and bartenders. They are people who looked at a text and saw potential and explored it until they became accidental experts.

I learned that Shakespeare is about creativity and passion and the stories his plays tell.

So I moved 900 miles away from the Quad Cities and moved to Virginia. Now I go to school and study Shakespeare in a program that works with the American Shakespeare Center where I study under world-famous Shakespearean scholars and interact with them on a daily basis.

And now I know that the rhetorical term for lines with the same ending is “anadiplosis”, and perform in a theatre where the actors speak directly to the audience and interact with them and have a season dedicated to an ensemble directing style.

And so when this pitch came along, I thought about how the best actor I have ever known is a microbiologist who makes swords in his garage. He isn’t a recognized Shakespearean scholar to anyone but a small company of 20 people in the midwest, but he is just as much scholar as any that I’ve studied with. His work, I think, is just as valid.

Since then, I have (quite literally) dedicated my life to Shakespeare. Shakespeare changed the way I thought about the world. Regardless of how high-school emo kid that sounds, it’s true. the profound influence Shakespeare (and Titus) have had on my life present, I think, a different sort of understanding of what Shakespeare is.

Titus doesn’t suck and I have issues.

One thought on “Arts in Entertainment Author Spotlight: Catie Osborn”