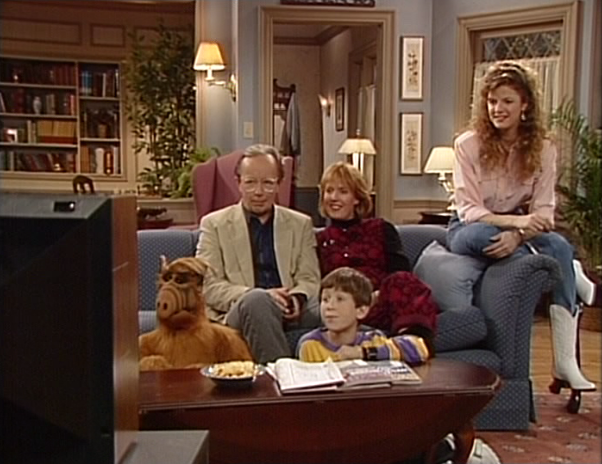 It’s nearly that time. When I started this series in…October 2013?! What the fuck have you people done to my life?

It’s nearly that time. When I started this series I sort of never expected to make it to the end. But I did. And I did because of you guys.

You readers, you commenters, you weirdos who only message me on Facebook or email me instead of commenting here. You people who spread the links. You late-comers who stumble upon the reviews somehow and blast through them all in a matter of days. You who laugh at my jokes, steal my screenshots, and wonder why I’m making that same exact Manchurian Candidate joke again.

So I want to celebrate. We still have a few more reviews to post, along with the season four bonus features and some wrap-up material, but it’s time to announce our big farewell celebration:

Please join us for….

We’ll have live chat, as always, and we’ll stream six episodes of ALF. I’ll also include a few fun oddities, provide short introductions to the episodes (the tears will be kept to a minimum), and we’ll close out the evening with a live dissection of Project: ALF, the TV movie that wrapped up the sitcom and by all accounts sucks busted nards.

I’ll post a few things after the stream — such as the official review of Project: ALF — but I want this to be our big, enthusiastic goodbye. And I honestly, truly, deeply hope you’ll be able to make it. I can’t fly everyone out to Denver and give them tongue kisses, and I assume this is the next best thing.

So, be there. Mark your calendars. All you need to do is show up here, on this very website, at that time. Honestly, don’t miss it. Ending the ALF reviews is going to be like saying goodbye to a close friend. Or at least like hearing that your racist grandfather fell off a cliff. Either way, it’s nice to have closure.

So, things for you to do:

– If you have any ideas for things to include, please let me know. Email, comment, Facebook, whatever. I have ideas, yes, but if you have suggestions of what you’d like to see, and how you’d like to celebrate, let me know. Contests? Special guests? Musical numbers? Say the word.

– …and, if you’d like to provide any words of thanks / criticism / anything else, send them over. I hear all the time from folks who appreciate these reviews, and their comments range from “they’re pretty funny” to “I had a really rough week and you helped me feel better.” And that’s great; I appreciate everything you guys have to say. But if you’d like to share it with the readers in general, get in touch and maybe I’ll do a feature that includes your summing-up messages instead of just mine.

Anyway, that’s all for now. Except one last thing:

I had a few folks suggest episodes to stream, and they all seemed to suggest the (relatively) good episodes, so that we can end ALF on a high note.

And you know what?

I’m really proud that in the course of ripping apart this dumbass puppet show, we all came out on the other end feeling positive. That means a lot to me, and it speaks volumes about the kind of community we have here. It would be easy for people say, “Just show any old shit; I’ll be drunk anyway.” Instead you guys said, “Hey, let’s see the stuff the show did right.”

And I kind of love that.

I’ll post reminders in the coming weeks, but, for now, get ready. Get your requests in. And let’s go out with a bang.

18 thoughts on “ALF Wiedersehen: The ALF Reviews Finale Stream, May 20”