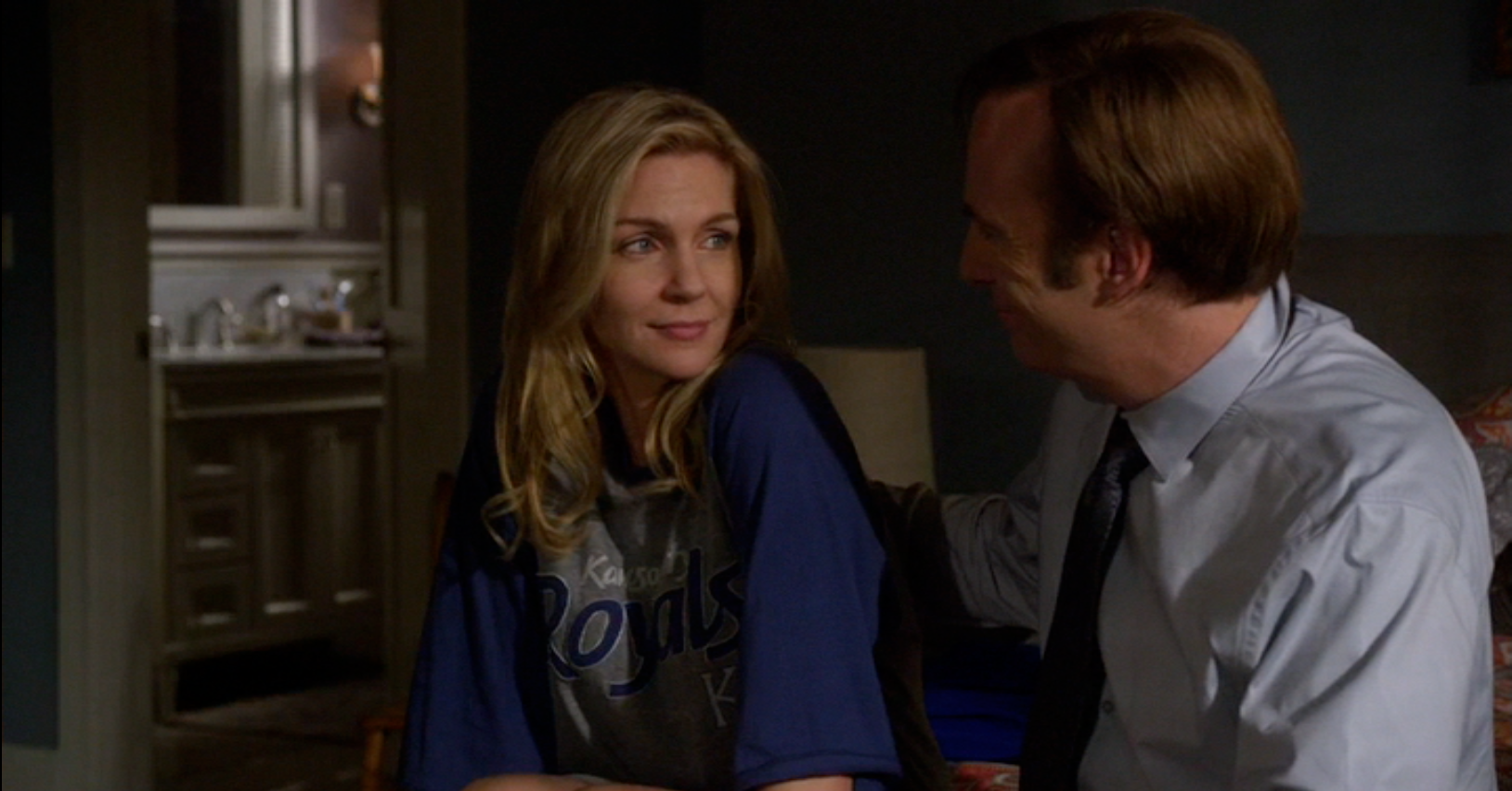 The second half of a season of a heavily serialized show like Better Call Saul needs to suggest momentum toward some clear — though obviously temporary — terminal point. “Bali Ha’i” suggests that the show is fully aware of this, as it edges our three primary characters toward decisions they won’t be able to take back.

And that particular number of primary characters — drifting around, having independent arcs, setting out on rarely overlapping adventures of their own — can prove troublesome at such a time. No, it’s not difficult, narratively speaking, to push Jimmy, Mike, and Kim separately onto the next step of their developments. But as their paths seem to diverge more often than they converge, what does that mean for Better Call Saul? Doesn’t that make it less about how Jimmy McGill becomes Saul Goodman and more like some shared-universe anthology series?

I’m speaking hypothetically here about the problem, and I don’t mean to suggest that Better Call Saul actually has that problem. But I do think, from the standpoint of artistic construction, that it’s a question worth considering. I’m willing to believe that Kim plays some very clear, very direct, very specific part in Jimmy’s transformation…but is that because of anything I’ve seen in Better Call Saul? Or is it because Breaking Bad already told me where he ends up, and as this is its prequel series I am obligated to assume that she must?

To put it another way, if Breaking Bad didn’t exist, would I watch Better Call Saul and conclude that Kim will become more important to Jimmy as the show progresses? Or less?

The same, of course, can be asked of Mike, but we already discussed that a bit in the last episode. He was off on his own journey, doing his own thing, not really relevant to or interested in whatever the heck Jimmy McGill was doing. That was obvious. Less obvious at the time was that we could have said the same thing about Kim.

“Bali Ha’i” brings the question to a head, pushing Kim right up to a further separation from the initial, core version of the show as she toys seriously with the idea of leaving Hamlin, Hamlin & McGill. No, that wouldn’t necessarily remove her entirely from Jimmy’s orbit…but it would push them, in a logistical sense, a degree further apart.

Originally Hamlin, Hamlin & McGill was the connective tissue for Jimmy, Kim, Chuck, Howard, and indirectly Mike. It’s the one thing, the one setting, the one constant they all had in common. Then Jimmy relocated and joined a different law firm. Mike’s role as a courthouse parking attendant became sidelined to focus on his independent contracting for gang members. Now Kim considers leaving, too. And she might. I hope she will, if only to see what Better Call Saul does once nearly all of its characters have left the mothership.

Of course, as “Bali Ha’i” toys with Kim further splintering the narrative, Kim herself reaches back out to tie it together. She talks to Jimmy again. She invites him to relive the high of the season-opening “Switch” by swindling a vulnerable mark, which is a nice moment. A much nicer moment is the reveal that they don’t cash these checks; they hold onto them like trophies, which is almost adorable.

But the nicest moment is that both Jimmy and Kim — each on thin ice with their respective firms — walk out on their work obligations to do this. They each know that they’re abandoning their careers (again, temporarily) to pursue something that’s more important to them: each other. They’re individually in deep shit. They individually have to claw their way back out. They individually need to atone, professionally, for damaging lapses of judgment.

Goofing around together is important, though, too. And when Kim calls Jimmy to join her, it’s clear that now, at least, it’s more important. To both of them.

One very interesting revelation to me is that Kim also worked in the mail room at Hamlin, Hamlin & McGill. In fact, she did so for six years. I knew that Jimmy met and befriended her when he worked in the mail room — in fact, “Rebecca” tells us that they became close within his first week on the job — but I didn’t realize that she was a direct colleague. I figured she was an attorney of some kind who just happened to get chummy with someone who was a bit lower than her on the corporate ladder. That would gibe with just about everything I’d already concluded about Kim, so I was surprised to find out that they were sealing envelopes and fumbling around with the copier together.

This adds a bit of a wrinkle to my pet theme, which is that you are what you are, and if you try to be or become anything else, the universe will slap you right back down. Certainly that still applies to Jimmy, but now we find that Kim was granted an opportunity to advance. To grow. To develop into something more. Hamlin, Hamlin & McGill even fronted the money for her schooling.

That’s all we really know, though. And while it may complicate the theme, I don’t feel compelled to abandon it just yet. Somebody, at some point, for some reason, was willing to nurture something in Kim. Was willing to take a chance. Was willing to elevate her. Whereas Jimmy was preterite. Passed over. Refused. No matter how hard he worked or what he accomplished, he would not be afforded the same chance that Kim was.

Perhaps Kim’s place in the universe has some degree of mobility factored into it. Granted, it’s mobility that comes with a high price (or at least two high prices: firm loyalty and debt), but it is mobility. And, hey, maybe Jimmy’s does, too. We know he doesn’t end up where we see him now. Part of the Better Call Saul experience might just be finding out first-hand exactly the lengths of everybody’s leash.

Then there’s Mike, who this week is in deep shit of his own. Yes, it’s great to see Action Grandpa doing his thing. That will never get old, and I’ll take scenes like his remote-control fakeout every week until the show decides to stop giving them to me. But I have to say that I didn’t expect to see the cousins from Breaking Bad turn up. And I felt the chill when they did.

The cousins menaced Walter White in everyone’s favorite parent show, and they were a very real, very legitimate, very scary threat there. I probably should have expected them to turn up at some point — what with Tuco, Gonzo, No-Doze, and Hector already here, leaving a pretty wide opening for them — but…yeah. That was probably the biggest surprise cameo I’ve experienced in this show yet.

In fact, the one character who seems to be the most dangerous — Hector — is the one we already know comes out badly. (Though, obviously, his eventual incapacitation may in no way be a result of this particular event.) The characters we like will be okay, and the characters we don’t like are going to suffer.

That should be reassuring rather than worrying.

To quote an earlier paragraph, I’m speaking hypothetically here about the problem, and I don’t mean to suggest that Better Call Saul actually has that problem. It’s just interesting to consider. If everyone watching already knows who lives and dies (unlike the artful, spiraling uncertainty of Breaking Bad), what do you do?

It’s hard to say, and “Bali Ha’i” doesn’t have the answer. Better Call Saul will have to find a way to make these foregone conclusions feel uncertain, and I know that it can succeed. After all, how much of Better Call Saul did you picture when you originally wondered what made Saul Goodman who he is?

This show has the capacity and ability to surprise. If anything, it might be playing with us by reminding viewers of that certainty before throwing a curveball. But we’ll see.

And that can matter. I don’t know if many people watching the show at this point care about Nacho they way they cared about Walt or Jesse or Hank, but the fact is that there were stretches of Breaking Bad that made it difficult to care about Walt and Jesse and Hank. Each of them, and many other characters, shrugged off audience sympathy at various points. Sometimes they deserved to get their asses kicked…or worse. Which is what made it all the more harrowing when it inevitably came…after they became more sympathetic and we had stopped wishing it upon them.

There’s room to play with Nacho, but I don’t think we’re there yet. I look forward to seeing it happen, though.

Anyway, what’s Noiseless Chatter without some needless bitching about something I enjoyed? (Oh, yes, I enjoyed “Bali Ha’i” a great deal. Let me make that clear.)

My Complaint of the Week is that I’m not sure I buy Hector caving to Mike’s bluster. Hector rescinds his offer of $5,000…telling Mike that that time has passed; all he gets out of it now is an assurance of safety for himself and his family. So far, so good.

Then Mike demands $50,000 instead of…y’know…$0. And after much too little deliberation, Hector agrees.

Why? What does he get out of it?

I don’t know. I question that. It’s probably necessary from a narrative standpoint, but I can’t make sense of the character logic.

Maybe at this point in his life, Hector has something of a heart. Maybe he admires Mike. Maybe he sees this as an investment on working with him again in the future. (It’d sure give him something to lord over him if he ever needs a favor.)

Or maybe, more simply, he just doesn’t want to deal with the cleanup and investigation of three dead bodies, which is going to result in far more work for him than a few years scraped off of his nephew’s sentence is worth.

My point is that there are reasons he might acquiesce to Mike’s demand, and I can think of a bunch of them. But I didn’t feel them during that scene, and I’m willing to believe the show wasn’t sure what they were, either. Hector agreed because he had to agree in order to get to whatever the next plot point is.

And that’s a shame.

Because a reason, or even the ghost of one, would have told us a lot about who he is, where his mind is, and what he’s planning next.