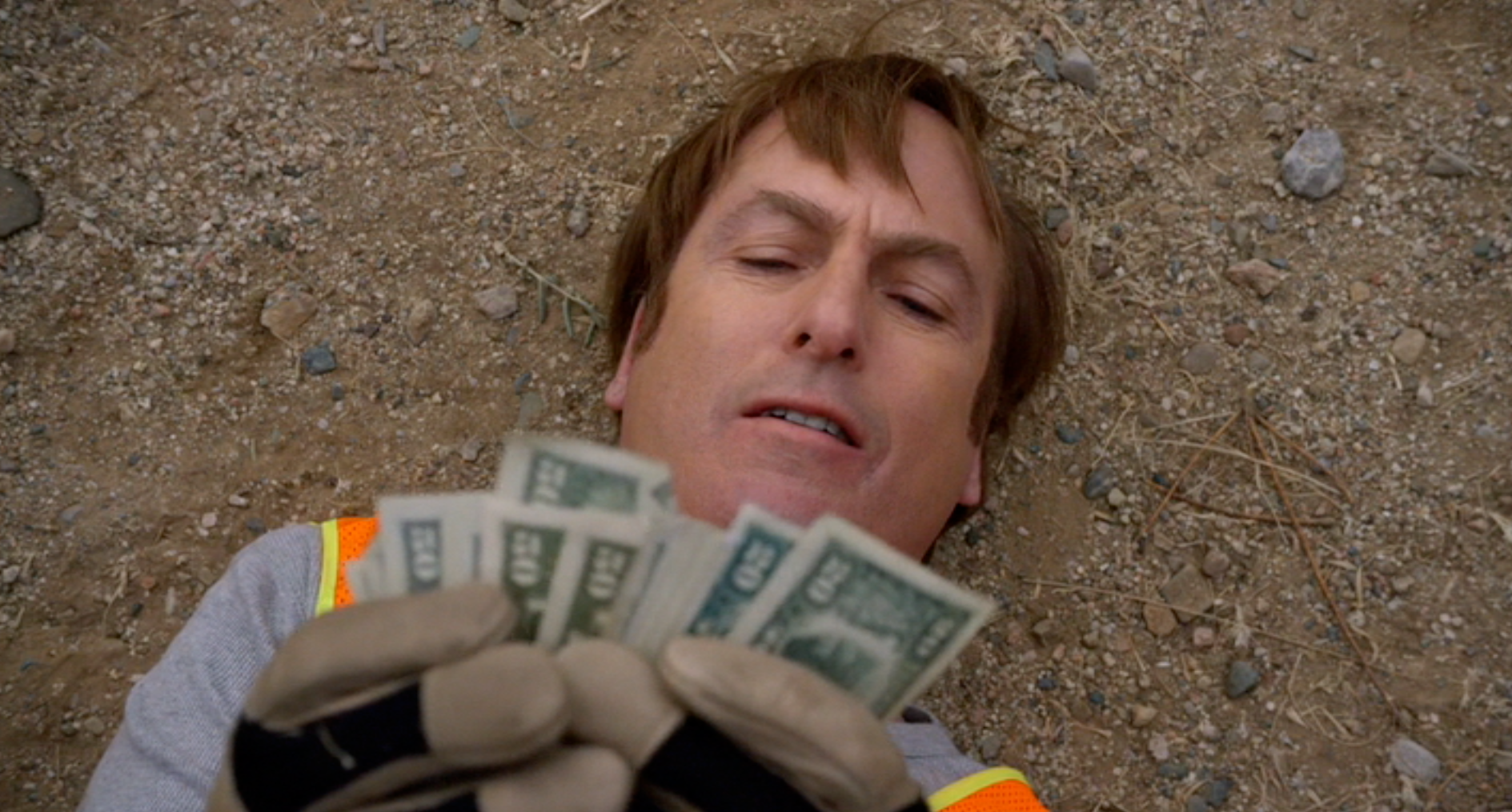 Better Call Saul skipped a week to avoid airing a new episode on Memorial Day. That’s something we all feel here and now, but it won’t matter for those who are binging the show on Netflix or DVD in the future.

And…you know what? I think I’m glad we had a silent week between episodes. I think that extra, empty space actually helped. I think it made a few things matter a bit more than they would have otherwise. Or, at least, it helped to make it feel as though they were landing at different times.

That empty space, I’m sure, was unintentional. It certainly wasn’t part of the pitch sessions, it wasn’t in mind when the scripts were being written, and it was of no concern to the editors working day and night to package up the footage. But it worked. It was a bit of accidental, passive worldbuilding. An intermission during which we didn’t see the characters, but they kept moving.

Alright, yes, “unseen” isn’t strictly true in any of those cases. We see a snatch of each. (Presque vu, as Chaplain Tappman might put it.) But those snatches are meant to orient us. The passage of time, on the other hand…the expanse of time…the loose ticking of the clock in the background as the characters make more, more, more progress toward what they want…

That we don’t see. That’s what the empty space last week provides. That’s why I believe more in the progress we see here than I might have otherwise.

Each of the characters filled theirs.

It was surprising to see Chuck pulling his life together rather than wallowing or resisting, but it does make sense. Chuck never realized he was broken. He needed to be shattered completely before he was aware enough to fix anything. Now…he’s trying, bless him. He wants to do better. And as much as I am on Jimmy’s side at this point, Chuck does deserve to live a better life than the one he created for himself. He’s taking steps to get there. Small steps, but he’s doing it.

And as Chuck begins his rise, Jimmy takes a fall. Literally, yes, but there’s also the fact that he regresses to his broken state: that of Slippin’ Jimmy. It’s a desperate act, but it’s one he knows he can rely on. And it works. No, I didn’t want to see him get reduced to that again — after all we’ve learned about him, after all he’s grown, after all he’s proven he’s capable of — but I can’t really blame him.

Jimmy’s tried multiple times to make a fair (if not entirely honest) living. Whether he’s tracking the Kettlemans down in the woods, digging through dumpsters for evidence, writing and producing a commercial for his firm, or funneling customers into a guitar shop, his good deeds get him nowhere. He falls back to the ground. He proves his worth, and it might even be acknowledged in some superficial way, but he’s slapped down where he belongs.

That’s what he gets for his trouble, his effort, his dedication. He gets reminded of his place in the universe, as he was here by the brothers who owned the guitar shop and realized they could cheat him out of their arrangement.

Not because it’s the right thing to do, but because he knows it works. It’s not his fault. The universe left him with no other choice. He can work his ass off to climb some temporary step or two…or he can slip on a drumstick. Morally, he should do the former. Rationally, the nature of the universe in Better Call Saul insists he do the latter.

Jimmy’s competency bites him. It always has. He’s good at what he applies himself to, but where does playing by the rules get him? Where did it get his father? It’s no coincidence that we opened tonight’s episode in the sunk McGill family business. Where would it get Nacho’s father? (Well, hopefully we won’t have to find that out.)

The Better Call Saul universe — like this one — rewards bad behavior. Not exclusively, but easily enough that it’s a viable option, and often enough that it might be the smarter option.

It’s not sustainable (we all know how Breaking Bad ended for each character involved, and we know without question that Jimmy loses Kim, his career, and his identity), but who’s worried about sustainability?

I have bills to pay at the end of the month. The judge said I have to finish my community service this week. I need to find a client and produce a commercial to air tomorrow.

We’re just trying to make it through the day.

We’ve tried to do things the right way, and it hasn’t worked. You can’t blame us, now and then, for trying the wrong way, just to see what happens.

It’s not our fault the universe decided to teach us that one.