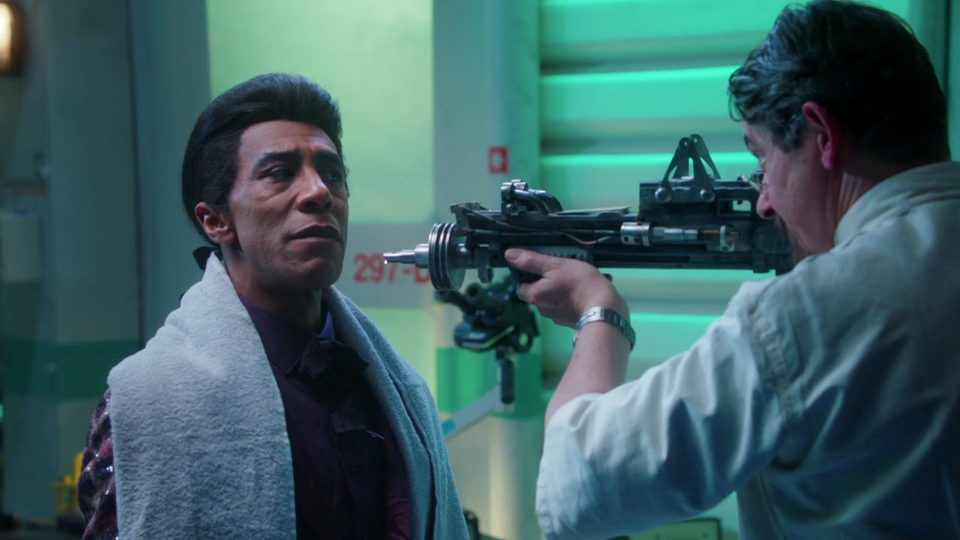 Post-revival Red Dwarf has been pretty uneven. I think it’s safe to say that. Fans may not agree on the particular high points and low points, but I don’t think I’ve seen anyone say that Dave-era Red Dwarf is unilaterally good. We can disagree about where it stumbles, but at the same time we can all agree that it does stumble.

I had no idea what to expect from series XII. And, well, one episode in, I still don’t. I feel a mix of optimism and trepidation. Optimism because series XI was, I felt, the strongest the show has been since series VI. And trepidation because…well, series X and “Back to Earth.”

The show could go either way at this point, but that arguably represents progress. From series VII through X, the show felt pretty stuck. Which is an odd thing to say, I admit, as every one of the series in that group feels completely different from the others. When I say “stuck,” though, I mean stuck in terms of quality. The show had trouble shifting out of low gear, no matter what the vehicle itself might have looked like, or who was in it.

It probably sounds like I’m being dismissive of Doug Naylor’s solo work on Red Dwarf. And I am, but not because Rob Grant left after series VI or because I don’t think Naylor is capable. I just feel that it took him a very long time to find his footing after Grant’s departure. That doesn’t mean he’s lazy, untalented, or any number of other clearly false accusations I could throw at him. It just means the machine worked a lot better when there were two people manning the controls.

Red Dwarf was still alive, which could be seen as a good thing. But the lows were much lower and the highs nowhere near as high or frequent as they had been. That’s a pretty heavy counterweight.

But then we had series XI. Specifically, we had “Twentica,” the first episode of that batch.

And it felt right. It felt like Red Dwarf. It felt like the past few series hadn’t happened at all. And it wasn’t just good…it felt effortless.

It made me laugh, it made great use of a solid concept, and it told its story in a really fun and unexpected way. It was the best episode I’d seen since the original run, and it proved that Naylor’s solo version of Red Dwarf really could recapture the magic of the show at its best.

The rest of the series, I’d argue, proved that that episode wasn’t a fluke. I didn’t love all of series XI, but I sure as hell appreciated it. Even the weaker episodes (“Samsara,” “Officer Rimmer”) had a lot to recommend them, and the strongest (“Twentica,” “Krysis”) absolutely deserve their placements pretty near the all-time best. In other words, when series XI misfired, it still worked. And when it was good…well, it made VII through X feel even stranger.

So we’ve proven it. Naylor crafted for us his first sustained run of episodes worthy of the Red Dwarf name. And, of course, we turn to XII to see if that can last.

I don’t think “Cured” answers the question, but I do think I’m being a bit harsh on it simply because the previous series was so good. “Cured” feels, at times, an awful lot like classic Red Dwarf. But series XI already proved that Naylor could do classic Red Dwarf. That’s no longer the pleasant surprise that it was…it’s the expected baseline. And I don’t really think “Cured” rises above it.

The central concept, it has to be said, is great, and feels absolutely ripped from the classic years. If I was told this was an idea from the show’s heyday that they never got around to making, I’d believe it. The crew finds a research station that has developed a cure for evil. Proof of the cure’s success struts around in the forms of harmless versions of Adolf Hitler, Joseph Stalin, Messalina, and Vlad the Impaler.

It’s a classic-feeling idea, and it mainly brings to mind the waxdroids of “Meltdown.” (Even moreso when it’s revealed that these figures are indeed robots.) There are a lot of possibilities for this to play out, but the important thing is to explore the idea in interesting ways and have some fun with it.

“Cured” does that. But it still feels rather…empty.

I think part of that feeling comes from the fact that the show’s two strongest characters — Rimmer and Kryten — don’t get much to do. The Cat and Messalina have a dynamic, Lister and Hitler have a dynamic…and the other two just disappear for a while. Even when they are on camera, they just sort of take up space. The opening scene — in which The Cat develops his poker face — has a few token lines from Rimmer and Kryten, but otherwise they just wait quietly while Lister and The Cat have their fun.

It’s a little weird. We’ve had plenty of scenes in which two characters play off of each other alone. (Such as Lister and Kryten at the beginning of “Camille,” or Lister and The Cat stuck together in “Samsara.”) But we don’t usually have other characters present, doing nothing, and it feels a bit off. Scenes like this would have been a perfect opportunity to give Rimmer and Kryten some business if they weren’t much involved with the main plot, but it didn’t happen. Couldn’t Rimmer have taught The Cat about a poker face instead?

To be frank, though, I liked the scene. I liked it a lot, and I thought it was genuinely funny. Danny John-Jules has been a consistent highpoint of Naylor episodes, and I don’t think that’s going to change any time soon. I just wonder why Rimmer and Kryten got so clearly sidelined.

I will, of course, contradict myself right now, because I liked the fact that Rimmer was sidelined toward the end. As Kryten is reading the results of the psychopathy test, I can’t have been the only one who expected the psycho to be Rimmer. That’s the way jokes like this have been structured in the past (“Justice” being perhaps the most obvious example), and those jokes work. Rimmer is a deeply flawed human being, and earlier in this episode he both suggests leaving five people behind to die and carps about potentially having a wheelchair-bound scientist aboard Red Dwarf. All signs point to Rimmer.

And yet it’s The Cat. Which is the more surprising outcome, and yet totally believable. It’s funnier. It’s smarter. And it sets up a great conclusion in which The Cat is the hero of the day. Not, of course, because he behaves in any heroic manner at all, which makes it even better.

I liked so much about “Cured.” I liked far more than I disliked. The guest actors were all very good, with probably the most adorable Hitler we’ll ever see in any form of media. There were good laughs sprinkled throughout, even if I didn’t see the extended guitar duet as the highlight the episode clearly thought it was.

My main problem with it, though, is the reveal that the scientist himself is a villain. So many great episodes of Red Dwarf explore a concept — and/or introduce danger — without there being a clear villain. “Meltdown,” again, is a good example; there are warring factions, but the episode doesn’t give us a big bad, and so allows Rimmer to become one. Or “Legion,” in which the title character is in no way a bad guy, and yet must be overcome in order for the crew to escape. Or “Better Than Life.” Would that episode have improved if Rimmer had a rival other than himself?

Episodes with distinct bad guys can work fine. (“The Last Day,” “Quarantine,” “Out of Time”) But “Cured” didn’t feel like an episode that needed one. It had a strong enough central concept that some kind of episode-ending decision (as opposed to defeating a bad guy) could been spun out of it. In fact, we toy with one such decision: do we leave them behind to die or take them with us?

As written, the “right” answer is clearly the latter, but with some tweaking, it could have posed an interesting ethical dilemma. Maybe Starbug with its busted thruster can’t hold the weight of five more people. It can only hold three more, say. Evil’s been cured, so these folks won’t fight and argue and backstab to get the spot. What do they do instead to curry favor? It would be interesting to find out.

Instead, though, the point is abruptly rendered moot. The historical figures are only robots, and the only actual living human is a bad guy.

That’s not interesting. It gives The Cat a great moment, but it deflates so much of the episode’s potential.

I liked “Cured.” I have a feeling that watching it again will make me laugh instead of think, though, and that’s a shame, because there’s a really strong concept here. And while the episode by no means fails, I think it does shirk the opportunity to explore it the way the best episodes have done.

Red Dwarf is back. It feels like itself again. It’s justifying its existence.

Now I’m just waiting to see if it can — or wishes to — do a little more.