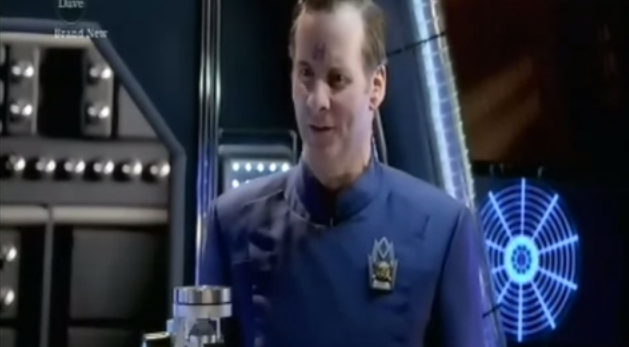 I think it says everything about Red Dwarf X that “The Beginning” floats to the top mainly because it wasn’t outright terrible.

In fact, at times, it came pretty close to being good, and it sustained that pretty-close-to-being-good level of quality about as well as “Lemons” did. That’s definitely welcome, as even though Red Dwarf X feels like an enormous misfire to me it’s nice to end on a high note.

Unfortunately that high note really is relative, as “The Beginning” is marred by the same kind of misjudgment that gave us Lister on hold in “Trojan”, Taiwan Tony in “Fathers and Suns” and the crew clowning around to silly music in the aforementioned “Lemons.”

Doug Naylor must not feel like he’s writing comedy unless somebody on set is broadly mugging, speaking with an exaggerated accent, or just generally acting like a desperate circus clown regardless of actual context. Here in “The Beginning” that’s manifested early on with Hoagy the Rouguey, or however that’s meant to be spelled, who is some kind of robot I guess who lives next door to Red Dwarf and gets the crew embroiled in his hair-brained schemes on a regular basis. Again, it sure was nice when being three million years in deep space felt different from living in an apartment building in a bustling city, but what do I know.

Poor Hoagy makes some funny faces and lets his accent drift pointlessly from Super Mario to Dr. Wily as he bothers Lister and then gets embedded in a wall. Why not, right? Lister promises he’ll be back to rescue Hoagy but for the first time all series I’m glad Doug didn’t bother to look over his first draft before shooting the episode, as the fact that we didn’t get a second helping of Hoagy is one of the best things about this one.

We’ve also got some rather atypical scenes in which a group of killer Simulants on a different ship engage in comedy routines separate from the Dwarfers. It’s not often that we see other characters getting their own spotlight, free of intervention from the main characters. In fact, only two examples really occur to me: “Holoship” and “Meltdown.” In the former it was brief and for plot reasons, free of comedy and used for necessary exposition. In the latter it was indeed a comedy routine, but its corniness was offset by the impressive disorientation of having such disparate historical figures bickering as they were.

Here it’s just…filler. It’s like a supporting feature that for some reason keeps interrupting the film you paid to see. The actors aren’t particularly funny, which is fine as they could get away with being simply menacing…but the menace falls through when they’re asked to act like such imbeciles, stabbing themselves on flimsy pretenses and re-enacting the Twentiety-Century Vole sketch from Monty Python.

It’s bad. It’s very, very, obnoxiously bad. It absolutely decimates the pacing, it prevents the episode from being what should have been an effectively claustrophobic experience (Red Dwarf‘s equivalent of “Balance of Terror”), and it populates deep space with yet more side characters that really shouldn’t be getting this many lines.

But…wait. I said I liked this one, right?

Well, I did. The rest of the episode was pretty solid, particularly the Rimmer material. Poor Chris Barrie hasn’t had a real chance to shine all series. Every so often he gets an appropriately Rimmery line he can sink his teeth into, but the rest of the time he’s relegated to broadly shouting sub-par material to an audience that wants to enjoy it so much that they don’t care what he says.

Here he gets to dig more deeply. Rimmer was never one-dimensional…or, rather, he wasn’t one-dimensional for long. There was an element of tragedy behind his needy professionalism, his longing for power, and his steadfast respect for the rules and etiquette of a civilization long dead. Here, for the first time in a long time, we tapped into that tragedy. And it worked.

Rimmer’s material here with his father is everything we should have seen in “Trojan” with his brother. His emotion was real, and as a result Chris Barrie managed to dial back his performance to where it was 20 years ago. He wasn’t an actor dressed again like his most famous character…he was Rimmer. His “fear” speech at the end was a particular highlight, and not only of this episode. It was a particular highlight of this and the three series that preceded Red Dwarf X. It was a lost and damaged man who was trying his hardest, and yet seemingly still destined to fail. It was uplifting and disheartening in equal measure, clever and foolish, sincere and inappropriate. It was good writing.

And there was a lot of good writing here. I don’t know that it balanced out the bad, or what that would even mean, but it sure as heck stood out in a great way. The cockpit and Blue Midget scenes were very reminiscent of series VI, even if it overall seriously paled by comparison. Kryten’s suggestion that they look out the window was immediately the best joke in the series up until that point, and it hearkened back to an era when the comedy was organic…when the characters didn’t have to dance and hump things to get laughs…when the vending machines didn’t hurl racial slurs at us as we walked down the corridors…when the characters carried emotional baggage with them…when the crew felt not like sitcom characters but like lost adventurers trying to find their way home…when the show didn’t coast on the goodwill engendered by putting its actors in front of an audience for the first time in however long and hoping for the best…

…when Red Dwarf was good.

And “The Beginning” reminded me of that time. Not thoroughly, and not consistently, but it got me there. It reminded me of why I’m sticking with this show, and reviewing this show, even when I so clearly don’t enjoy it.

It’s because I love where this show has been. It’s because I can love it again tomorrow. It’s because no matter what else happens, these are still characters that can be redeemed. Just because Rimmer didn’t bat an eye when his brother was shot through the heart in “Trojan” didn’t mean he couldn’t be symbolically shot through his own in “The Beginning.”

Because these characters are always there, locked, loaded, and ready for the right material.

“The Beginning” might well represent the beginning of such a rediscovery. It’s certainly possible, because when you brush aside the abandoned plot threads and fragmented bad ideas, there’s a great concept there, and a stellar central performance that promises big things.

I know better than to get my hopes up, but it sure would be nice if this show, moving forward, managed to deliver on that promise.

Time will tell. Until then, it was nice to get a glimpse, however fleeting, of a character I once, so long ago, fell in love with.