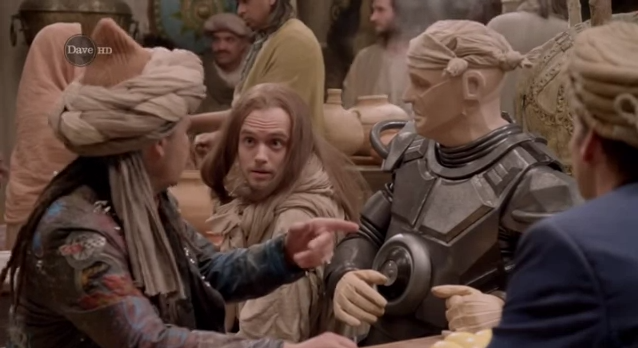 Is it any coincidence that the best episode of the series so far has no B-plot? I highly doubt it.

“Lemons” isn’t great. But here’s the miraculous thing: “Lemons” is good. Call me crazy, but the consequence-free slaying of a main character’s brother in the first week and Taiwan Tony’s Racism Follies in week two left me more or less dreading the crew’s encounter here with the son of God.

But it was good. It did a lot of things right. It did some things wrong, and in a few cases those were quite annoying things to do wrong, but it was better than “Fathers and Suns,” which was better than “Trojan,” and I’m finding it quite a bit easier now to be optimistic about the back half of series X.

“Lemons” starts off on some terribly shaky footing. For starters, Doug Naylor has the annoying habit of opening on scenes that set up later punchlines, but don’t have a purpose themselves. They feel disconnected and clunky, and that’s what happens here. Lister cooks dinner while The Cat attempts some humor by describing a comedy golf course he set up in the medical area. It ends with The Cat eating Lister’s dinner, which wasn’t much of a joke on its own and becomes even more disappointing when the eventual punchline is the same one we saw way back in the first episode of series VII, where it was faster, sharper, and a thousand times funnier. Belabored setups of old twists isn’t what series X should be aiming for.

Things get worse when we’re subjected to Ikea jokes. Did you know that sometimes those instructions aren’t very clear?! If you didn’t, then you’ve never seen a comedian bomb on stage, and, in related news, the being-on-hold-is-kind-of-annoying! subplot of “Trojan” probably held you riveted. The one positive point about this trite, mirthless digression is that “Ikea” isn’t mentioned by name. (We don’t have the same luck with “eBay” later.) In fact, it almost makes up for the montage of the crew clowning around with the machine’s parts. Almost.

Then, something magical happens: it becomes Red Dwarf. The crew finds themselves transported to 23 AD, and it’s almost as if Doug and the cast suddenly remember what show they’re making. The plot is solid: there’s a logical problem (no batteries in 23 AD means no teleporting back), a rational and scientific solution to that problem (batteries can be made out of lemons), and a left-field complication (the gang, y’know, meets Christ).

It’s a fair setup, and, for the first time all series, the episode sees it through. The adventure isn’t meaningless, the crew’s plight has relateable weight, and the new-character-of-the-week (for fucking once) doesn’t act like a cartoon character. It. Is. Good.

When the writing works, the story doesn’t matter as much. I’ll admit that I only found it easy to pick apart the narrative flaws of episodes one and two because…well…what else was I meant to be doing? Laughing? Hey, great plan, but it wasn’t in the cards.

Here, though, not only did the comedy work well enough to distract from any logistical issues, but the few potential issues I did notice were enhanced by the comedy. For instance, why did Doug have the characters beam into Britain if he needed them in India, and all it did was set up a quick map-walking sequence that was supposed to have taken six months? Easy: because by doing that, he could set up the later joke, wherein Rimmer informs the rest of them that they need to walk back to Britain for some copper wire.

Having your characters walk for six months off camera makes no purposeful sense whatsoever, but when it’s in aid of a genuinely good laugh, it works. I understand that jokes that land are by no means a rarity in comedy, but with the lame detours and disconnected components of the previous episodes, this really is something worth pointing out.

At one point in the episode I realized I was watching Jesus Christ laying on a bunk in a space ship three million years into deep space, after having had a kidney stone removed by a robot, a hologram, an evolved cat and the last human being alive. And I didn’t care how I got there, because moments like Rimmer being honored to hold Jesus’s dick made me glad to go along for the ride.

The rest of the episode is a bit of a step down, particularly when Jesus does become a cartoon character, but I don’t mind a weak ending. I don’t even mind a weak ending in tandem with a weak beginning. I just want to be glad I spent time with the episode, and “Lemons” gave me that for sure.

I can’t say more without spoiling something, and I don’t want to overplay my enthusiasm here — it’s absolutely relative — but I will say that something puzzled me. For an episode that really sought to reward long-term fans who pay attention to Rimmer’s character (explaining his middle name, reminding us that he likes to be called Big Man) Doug sure was quick to piss away two of his most memorable moments (he both hates Shakespeare now and his parents were no longer Seventh Day Advent Hoppists).

I’m not a continuity stickler in this show, but it feels a bit odd that an episode that went out of its way to dredge up two older bits of that continuity severely undermined two others.

Small potatoes though. Or lemons. lol and shit.

If only the crisis next week wasn’t that Lister’s nuts might explode, I’d be much more excited. As it stands, “Lemons” could just be a happy exception. And so what if it is? I’m happy with that.