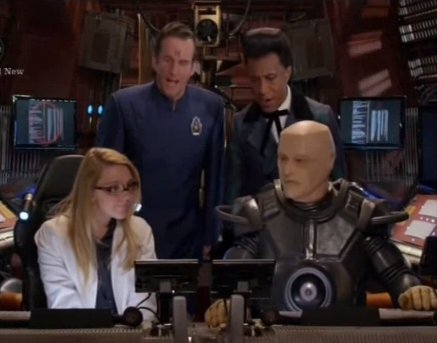 Hands up everyone who’s surprised that I think this episode went off the rails the moment Lister’s ballsack got wired to explode. No takers? ON WE GO THEN

I guess the upside here is that we now know “Lemons” was a one-off. A comparative breath of fresh air in the midst of a series that didn’t know what the hell it was trying to be, but was damned determined to annoy the everloving shit out of you while it tried to find out.

But I’m getting ahead of myself here, and my disappointment I guess technically qualifies as a spoiler, since the first act was actually quite good. In fact, while I didn’t need another “Lemons” per se, I actually started to believe that this episode might surpass it. After all, early disappointments in that episode had to do with far too long and unfunny exchanges (such as the Shakespeare bit) and buffoonish physical idiocy (assembling the Golden Shower or whatever the fuck). Here, the potential was there for each of these things to rear their heads again…and instead it was done right.

Rimmer delighting in the forms Lister would have to fill out was perfect character comedy. It worked. It was long, but it was funny. And the length of the exchange says a lot about his commitment to it; Rimmer isn’t a bastard for the sake of being a bastard…he’s a bastard because he is who he is…which just happens to be a bastard. A fine distinction, and one that this totally understandable character development rides nicely. After all, this is a man who is utterly sincere in wanting to protect his crew from exactly the sort of accident he caused that killed the crew. He can justify that, and he can justify it because he believes it. It’s real. He’s a human being…something he arguably hasn’t been since series VII. It’s really, really nice.

Oh, and the physical stuff…I was referring to Kryten drying spoons by farting on them, but I don’t have much to say there.

Well, okay, I can just say that it was fast and funny, very much a Futurama style joke that doesn’t overstay its welcome. So neither will I and that’s enough of that.

So far, so good. Kryten and Cat speaking in unison wasn’t particularly funny, but the reveal of the title of the book Cat is carrying is good. As in…really good. As in a very smart joke well executed. So thanks to that, I have at least a few seconds of “Entangled” that I can nominate for inclusion in a highlight reel.

Then Lister reveals that he lost a poker game to some BEGGs (don’t ask), because if it’s one thing Red Dwarf needs it’s loads of weekly side characters that make it feel like the crew is living in lower London rather than in the bowels of a mining ship lost 3 million years into deep space. The BEGGs (really, don’t ask) wired some bombs to his testes because lol bombs and testes. The first act ends there along with my dignity, because I was enjoying this and now I suddenly feel ashamed for doing so.

Act two, to put it diplomatically, is a screaming pile of shit. It opens with the crew confronting the BEGGs (honestly now…) who resemble GELFs so much in every way that there really shouldn’t be a distinction, Kryten and Cat start talking in unison again because crystals or something, the BEGGs (fuck you) all choke to death because of that I guess, though shit knows how that’s supposed to work, then a TV turns on because of course it does, and it’s showing some black and white movie obviously and the characters in that movie speak totally unrelated lines which so clearly are meant to be oblique clues to the crew about consulting the cover of the book Cat was holding which in turn provide vague guidance on how to Save Lister’s Nads.

If that feels like narrative flow to you, then being bashed over the head with a baseball bat must qualify as an at least passably written short story. It’s garbage. It eats up time. It makes no sense and serves no purpose.

Last week Doug had the crew beam into Britain even though he needed them in India. That made no sense, until it had a killer punchline, which retroactively justified an odd decision. Here we get odd decision after odd decision without much (if any) cause for laughter.

I don’t know when this show became It’s Always Sunny in Philadelphia but the lack of human response in this crew is becoming pretty distracting. At least when they met Jesus they played with his dick in the service of a helpful medical procedure. It was crass, but it had a purpose. Here we’re shooting side characters and kicking them out of airlocks and not paying any mind to what that says about the crew as people. Which is fine I guess, as Doug obviously didn’t pay any mind to that either.

Or maybe they just know next week they’ll meet a whole slew of new disposable characters so nothing’s really lost.

I remember when these characters used to be people, though. The first half of this episode remembered that, too. Those were good times.

Oh well. I don’t care. We have two episodes to go and one of them is a love story starring the racist vending machines from “Fathers and Suns”.