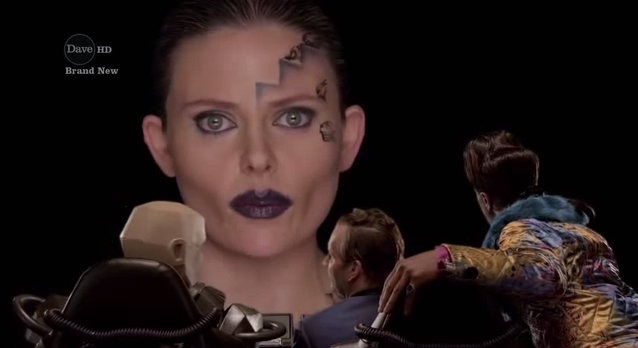 Well, that was fucking awful.

Okay, with that out of the way, we can…no. No, it was just fucking awful.

“Fathers and Suns” represents the fifth consecutive episode in which the nicest thing I can say is that it’s nice to see the cast together again. And it’s getting to the point that it’s no longer nice to see the cast together again. What’s nice about knocking them around in humiliating ways while the sharp writing and character-driven comedy that once defined the show circles ever more deeply down the toilet?

Like last week’s “Trojan,” “Fathers and Suns” has a can’t-miss premise. And then it spectacularly and insultingly misses anyway. I’m still reeling from just how thoroughly they managed to botch a Rimmer’s-brother reunion story, but “Fathers and Suns” wastes no time in shoving even larger problems into our faces.

The plot is threefold. Firstly, Lister is coming to grips with certain emotional issues that have resulted from learning that he’s his own father. That was something he learned 15 years and 18 episodes ago so it’s a little strange he’s not so much as thought about it again until now, but since it’s the best thing about the episode I’ll take it gladly. The second plot is that Rimmer and Kryten install a new computer because if they didn’t do that then nothing would abruptly try to kill them at the end of the episode. The third plot is that the crew seeks the council of “Taiwan Tony,” a racist caricature of a vending machine in order to inquire about racist things. Surprising everyone, this third plot is an absolute pile of shit.

So, the good: like much of series VII, the Lister plot isn’t particularly funny, but it raises fair issues. It’s a better story than it is a joke, and there’s nothing wrong with that. It would be nice to have some comedy elsewhere — which is where Taiwan Tony and his voice straight out of a blacklisted Loony Tunes episode come in, I guess — but it’s handled interestingly enough, what with a videotape that Lister recorded for himself before getting blind drunk…so that he’d be able to separate himself from the advice he was passing on.

Poke logical holes in that basic setup all you like (it’s pretty damned easy) but it’s actually…well, nice. I like the idea of Lister practicing tough love, and forcing himself to shape up. I wasn’t laughing, but I was enjoying…and that’s the nicest thing I’ve been able to say about either episode so far.

Sadly, that’s about where the positives end. The new ship’s computer Pree is drawn from the same well the show has dipped into several times before, but here there’s a difference: this time, Doug doesn’t even know what she’s supposed to be doing. First she’s predicting the future, which is a good enough idea in itself. Then that’s gone and her performance must mirror that of the senior officer, so she makes incompetent repairs to the ship. Then that’s gone and she tries to kill Lister. Then Lister’s gone so she steers the whole ship into a sun.

While each of these developments would make for an interesting story on its own (and, indeed, some of these things have already made for stories of their own), the narrative whiplash we get from leaping from one so quickly to the next is almost painful. And while each of these sharp detours is at least tied somewhat to the last one, they quickly form a pretty incompatible logic within themselves. For instance, Pree couldn’t repair the ship properly because Rimmer couldn’t repair the ship properly; her performance is tied directly to what Rimmer can and would do, and that’s a major plot point. Then we need a different major plot point to happen, so she flushes Lister into space, even though that’s quite clearly something Rimmer wouldn’t do. We take great pains to set up one thing, only to ditch it in favor of something else that we then need to set up anew.

It ends with Pree gassing the crew with nitrous oxide, even though a previous plot point revealed that there was no anesthetic left on this ship, and Doug isn’t sure how to end an episode anymore without saying, “Okay, now this character wants to kill everyone.” Then the crew manage to shut the computer down because everyone, including Pree, forgot she could predict the future, and they all fuckin’ dance.

Slather all of this scattershot, barely-connected nonsense plotting over a disarmingly unfunny introduction to Taiwan Tony and some mortifyingly poor performances from the new Medibot and Dentibot characters (Seriously, why would anyone program a dentist robot to impersonate a slavering Peter Lorre? What’s the real-world logic there?) and you have an episode that almost challenges you to find something funny about it.

The Lister plot aside, “Fathers and Suns” plays like a Garth Marenghi-style parody of Red Dwarf. It hits the basic notes, but ensures that they sound sourly. It looks and sounds like the actual show, but is clearly needling parody of everything it can do wrong.

The Lister plot deserved a better episode, but, at this point, I’m not sure I’m right to expect a better episode. Next week they meet Jesus and make Jesus jokes, so there’s that. Oh well. I’ll just have to hope Doug manages to gas me with the non-existent nitrous as well. That wouldn’t do much for the state of the comedy, but it might at least make me laugh.