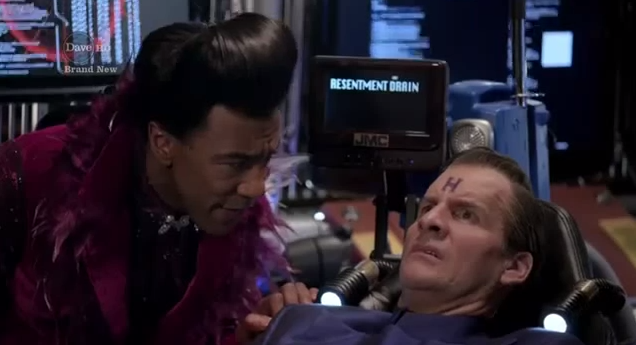 NOTE: Thanks to friend-of-the-website Ridley for the youtube link!

I was excited about the tenth series of Red Dwarf. It immediately became one of my favorite shows when I discovered it in my late teens, and I still look back on nearly every episode with fondness. “Future Echoes,” “Queeg,” “Thanks For the Memory,” “White Hole,” “Holoship”…all front-to-back classics, and that’s just a small sampling of a very long list.

I didn’t need the tenth series to offer up anything as great as those. I didn’t need much from it at all, actually. In fact, I didn’t even need a tenth series. I was perfectly happy with the original eight. (Less thrilled with the “Back to Earth” specials that we now call series nine, but still.) I didn’t need more, but, now, here it is.

And while I wouldn’t dream of writing off an entire series on the basis of one episode, I will say this: I definitely didn’t need “Trojan.”

That’s not to say it’s bad, but for an episode that revolves around delving into an often-danced-around aspect of a main character’s past, it surprisingly feels…well…unnecessary.

The plot ostensibly revolves around Rimmer receiving a distress call from his brother Howard, while the Red Dwarf crew is exploring a derelict spacecraft. Fine. They teleport Howard and another crew member to safety. Okay.

So that’s…that? They transported him to safety more or less immediately, so the danger’s over and there’s nothing at stake. Unless, of course, we manufacture something and clumsily wedge some danger in there at the end, which we do, of course, because that’s easier than sustaining tension throughout.

Plotwise, nothing else really happens, apart from an absurdly unnecessary death which does little more than ensure that Red Dwarf won’t have to worry about integrating Howard into any future story lines.

It’s sloppy plotting, especially when compared to some of the classic episodes listed above, but comparing this to classic episodes isn’t the point; the question is whether or not it stands well enough on its own. I’d have to say it doesn’t.

Too much of the episode feels like padding. Exchanges are protracted when they should be snappy, jokes are repeated multiple times in succession to diminishing returns, and it feels like there were at least five times that we zoomed in on characters making silly faces in lieu of actual comedy.

The worst offender is Lister’s phone call, which I guess constitutes a B-plot. He wants to order something from the all-droid shopping network, which exists so that we can at last mine that totally untapped vein of comedy at the expense of infomercials. (Did you know that some of the products they sell are NOT VERY USEFUL?) Lister’s on hold for the entire episode, and while it leads to some minor chuckles along the way it feels pretty pointless, and becomes extraordinarily mean-spirited during the climax: Lister is warned that the villain will kill them if he picks up the phone, so he throws a tantrum and picks up the phone. Rimmer’s brother is promptly shot to death. Hilarious.

It’s the kind of thing Family Guy has long ago run into the ground. See this guy who doesn’t deserve to be killed? We’ll kill him in a nasty way for a silly reason, and that’ll be funny. Right?

Well, maybe. That’s all subjective. But an episode that could have found so much of interest to say about Rimmer’s struggle for acceptance, his paralyzing sense of resentment, and his formative experiences at the hands of his abusive older brothers, decides instead to make jokes about being on hold (Did you know that sometimes people are on hold FOR A REALLY LONG TIME?), absolutely stupid spinning eyeball gags, and shooting Rimmer’s never-before-seen brother through the chest.

I know I shouldn’t be comparing this to previous episodes, but I couldn’t help but think of “Terrorform.” Rimmer faces his darkest impulses there as well, and it ends in a mean-spirited joke. But in “Terrorform” it feels earned. It feels organic. Rimmer learns something and evolves ever so slightly as a human being…and then the crew snatch it away from him. It wasn’t nice, no…but it was fitting. It was understandable. And it worked.

In “Trojan,” nothing fits, and little works. It feels cobbled together of disparate elements that come together about as beautifully as a bullet through the heart. Again, it wasn’t awful — there was some actual laughter to be had here, so, better than “Back to Earth” at least — but it didn’t really cohere.

Oh well. There are still five episodes left to go, and The Cat was pretty funny at least. He got the biggest laugh out of me simply by walking past an open door.

I know this writeup is pretty uncollected and I’m probably not expressing my opinions as lucidly as I probably should, but that feels thematically appropriate for what I’ve just seen, so there you go. Anyway, there’s a guy standing behind you who told me he’d shoot you through the head if I ate this apple, so I’m going to throw a tantrum and eat this apple. That’s what people do, right?