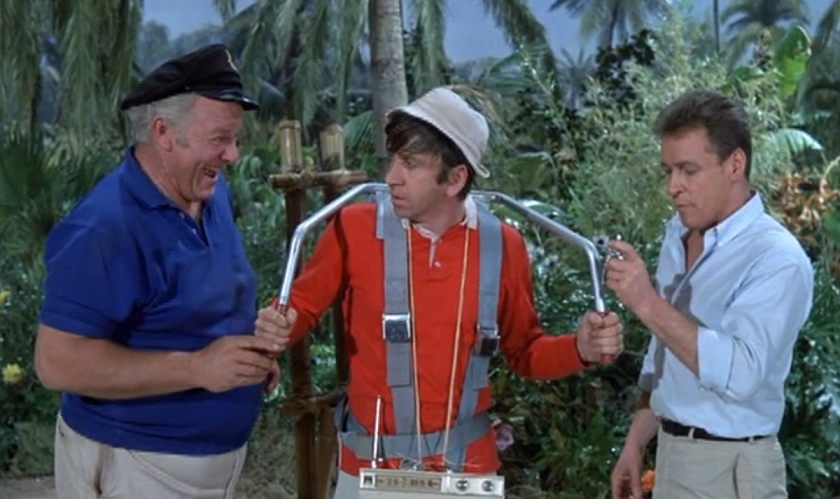 Last week, Russell Johnson died. It was a name that I recognized, but it’s not the name I thought of when I saw his picture. I didn’t even think of the name of his character. I thought of his descriptor. This man was The Professor.

I’m not going to make the case that Gilligan’s Island was brilliant television. I will, however, stand pretty firmly in my opinion that it was good for what it was, and had probably the most perfect sitcom casting this side of Arrested Development.

His death doesn’t get me reflecting as deeply on my childhood as the death of Jerry Nelson did. But it certainly does cause me to look backward, to exhume long-ignored memories, to remember simpler times in the world of entertainment.

I wasn’t alive during the original run of Gilligan’s Island, but I’d be surprised if there was a single episode I haven’t seen. It was in near-constant syndication when I was growing up, and it was a highlight of those rare days when I managed to trick my parents into thinking I was too sick to go to school. I’d lay on the couch and watch Gilligan’s Island, Press Your Luck and assorted soap operas I couldn’t tell you the first thing about. There was a kind of escape in shows like this…Gilligan’s Island in particular. It stuck with me…and I loved it.

I don’t know what it was about that show…but I can certainly make some confident guesses. For starters, that island was beautiful. Looking back I’m sure that most of it was filmed on a set, and any location shots were certainly not filmed anywhere near the tropical paradise that I had envisioned.

Gilligan’s Island didn’t just take the teeth out of the idea of being shipwrecked…it made it seem desirable. I remember feeling bad for Gilligan when he was berated at the end of many episodes. Sure, his bumbling often kept them stranded…but why on Earth did they want to leave?

The lapping waves. The rustling palm fronds. Gathering around a big fire to eat and listen to a radio broadcast. Sleeping in a hammock. Watching the sunset with your toes in the sand every day of your life. If I were Gilligan, my subconscious would probably squash any plans for rescue as well.

But there’s something comforting about Gilligan’s Island beyond its setting: its characterization. And that’s where Russell Johnson shined…and he arguably shined brightest.

When I say that the casting on this show was great I’m not just offering up a vague platitude. I genuinely feel it couldn’t have been better. Look at any screen grab or promotional shot from the show, and you won’t just recognize their faces; you’ll hear their voices. You’ll remember their mannerisms. You know exactly how they’ll interact with each other under any given circumstance.

The characters were rigid. At no point did they grow or evolve. Far from being a drawback, however, this was a strength; they started out so perfectly formed that there was really nowhere else to take them. Everything from their personal wardrobes to their personal weaknesses were drawn from the start. Gilligan’s Island may never have achieved greatness, but it absolutely achieved the next best thing: consistency.

I found myself relating to The Professor more than any of the other castaways as a kid. Nowadays there’s probably a bit of The Skipper in there, too, but back then it was Russell Johnson who kept me fixated on the show. As the others would — with the periodic exception of Mary Ann — succumb to some form of temptation or another, The Professor moved forward with a level head. He was on hand to explain the obstacle of the week, to outline the things the others needed to do or refrain from doing, and while it wasn’t always his hand that saved the day, it was certainly his calm, collected intellect that held them together.

He was a type, as were they all, but there’s nothing wrong with that. While nowadays the tendency is to wink and lampshade, Gilligan’s Island is a relic of a time that wasn’t afraid of looking ridiculous. I am positive that nobody who worked on the show — in any capacity — felt that it was realistic or profound in any way. And yet…there it still was. The actors and actresses were still making the enthusiastic most of their material. The opening and closing themes were still immortal. The writers were still coming up with genuinely clever material; sure, the weekly plotlines might not have been anything special (how many times was the entire episode based around a new visitor that washed up ashore?) but those plots only served as the framework upon which to hang some great lines and physical comedy. And those wardrobe people? Those wardrobe people had as much to do with defining the characters as anyone else did.

I think what I really liked about Gilligan’s Island was the fact that everybody was an equal part of this community. That held a lot of appeal to me. While in some cases their usefulness to the rest of the group was clear, in other cases it might have been a bit harder to recognize. But, ultimately, they were in this together. Tensions might run high, but they were a group. Everyone had a purpose. Everyone had a reason. And given enough time, and enough teamwork, we could get everything back to normalcy.

Neither Gilligan’s island nor Gilligan’s Island would have been the same without every one of these characters. There was a kind of comforting, rewarding stasis at work…a reassurance that though you might feel out of place in the world, there was somewhere that you would fit.

I loved The Professor. Some kids grew up idolizing Captain Kirk, or Luke Skywalker, and that’s fine.

Me? I looked up to a guy in a button-down shirt, isolated from civilization and doomed never to return, but who kept his cool, stayed productive, and retained his sanity…there on Gilligan’s island.

Rest in peace, Professor. And thank you.