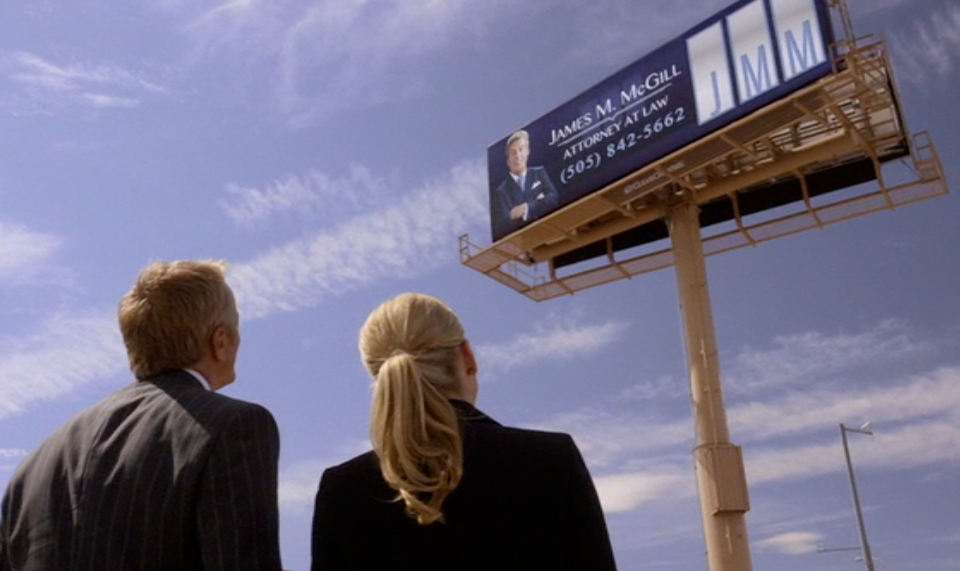 It’s hard to believe Better Call Saul has only been on for four episodes. It feels as though it’s run for much longer. That’s an indication, I think, of just how effortlessly it slides into the vacancy left by Breaking Bad. It’s not a replacement in terms of subject matter — could Breaking Bad have devoted an hour of its precious time to squabbling over a billboard? — but in terms of quality, and the sheer amount of care that goes into every aspect of its production.

Watching “Hero,” something struck me. When Better Call Saul was first announced, I was worried. Not because I didn’t think Goodman (or Odenkirk) could sustain a show on his own, but because Vince Gilligan wouldn’t be writing it. He’d create it, get some plates spinning, and move on to his next project. He’d be leaving a universe he created in the hands of others, and that’s always a worrying prospect…even when the universe is nowhere near as complex and well-structured as the one he developed in Breaking Bad.

Breaking Bad represents, from beginning to end, a remarkably sustained quality, and an even more strongly sustained vision. “Hero,” this most recent chapter in the life of Jimmy-cum-Saul, was written by Gennifer Hutchison…whose name was also attached to some excellent episodes of Breaking Bad. “I See You,” “Cornered,” “Salud,” “Buyout,” and “Confessions” represent her work for that show. In terms of tone, they have nothing — at all — in common with “Hero.” In terms of quality, they’re of a definite cloth.

What made Breaking Bad work at even its weakest moments — and what is making Better Call Saul work already — is a sense of artistry. There’s a level of attention given to the way shots are framed, costumes are fitted, and sets are designed that contributes to an overall feeling of mastery. At any given time, we may not know what we’re looking at, or why we’re looking at it. (Remember that kid on the dirtbike at the beginning of “Dead Freight”?) We stay attentive, however. Perhaps even more attentive, because we can trust the writers. When there’s the reassuring presence of an artist’s hand, we are willing to follow along.

“Hero” relies almost entirely on the artist’s hand, which isn’t to say it’s worse off for it. As of now I’d probably argue that it’s the weakest of Jimmy McGill’s outings, but that comes with the important caveat that it’s still very good, and oddly riveting.

The episode is responsible for a lot of setup that simply needs to be done, as until now Jimmy’s rivalry with Hamlin, Hamlin & McGill has been relegated to the background. It’s Hutchison’s job to catch us up and push that aspect of the story ahead.

It’s busywork, at least at its core. What salvages “Hero” is the fact that the show seems to revel in busywork…just like public defender Jimmy McGill. There may not be much at stake, but damned if we aren’t going to get a fireworks show.

The plot itself is simple: McGill buys and poses for a deliberately inflammatory billboard. I can’t go too much further than that without spoiling something, but I will say that once the episode comes to a close, it doesn’t actually amount to much more than what I just said. And that’s okay, because all throughout we’re sowing seeds for episodes to come.

We have lots of great character moments throughout, starting from the very beginning. Caught red handed, the Kettlemans hopelessly fumble their way through a justification for their crimes…one they obviously established a long time ago, and haven’t had to revisit since. That’s why when it’s finally verbalized it starts with some vague grandstanding about getting paid fairly for overtime and ends with them pointlessly reminding McGill that human slavery used to be legal.

It’s a well-observed moment; these people made a conscious choice to break the law, and reasoned themselves into a kind of comfort before doing so. What they were doing — they taught themselves to believe — wasn’t legal, but it was right. They talked about it and thought it through. They discussed it long into nightfall and then daylight. And once they convinced themselves, they never had to think about it again. Until now…when they reveal all their clever rationalizing to be hot air that no longer even convinces themselves.

Chuck also gets an incredible spotlight moment when he needs to venture out of the house to buy — not steal — a neighbor’s newspaper, in a sequence that I simply cannot describe without stripping it of all of its humor. Having said that, I absolutely need to gush over how wonderful it was that he not only left $5, but went to find a stone to weigh it down after it started to blow away. The return trip being shot from the neighbor’s perspective was just perfect, and that camera angle alone was probably responsible for my biggest laugh of the night. (I can’t wait for a spotlight episode on Michael McKean; I’m holding back most of my comments about his character until we learn a bit more.)

Also wonderful was McGill getting himself fitted for a decidedly Hamlin suit. At first I just assumed he was spending his windfall (more on that in a moment) on anything he’d need to look legitimate. A nice suit, certainly, would fit that bill. But then, after the tailor leaves, McGill wanders over to the shelves and starts considering hideous color combinations that hint at the Goodman within. Perfectly silent, and a perfect moment.

Actually, “Hero” is shot through with echoes of that character to come. We witness the earliest (chronologically speaking) occurrence of the name Saul Goodman, a deliberate pun on the part of a too-chummy Slippin’ Jimmy, and we’re reminded of something we learned in “Uno”: the fact that Jimmy McGill is not going to be able to practice law in Albuquerque under his real name. (Well, technically he can, but as the battle lines are drawn, it’s not unlikely that the change to Saul Goodman is the result of a fight poorly picked.)

But perhaps the biggest indication of what’s to come is how the night in the woods resolves itself. McGill does indeed offer to turn a blind eye to the money for a chance at representing the Kettlemans. He outright refuses a bribe, and offers, instead, his services.

It’s only when Mrs. Kettleman reminds him of something that he relents, and allows himself to be bought off. She reminds him, in a moment of perfect, inevitable heartbreak, that they won’t let him represent them…because he’s the kind of lawyer that guilty people hire.

I know he takes the money. I know how he accounted for it. (Literally.) And I know what he did with it.

But you know what?

Part of me truly hopes that there is some humanity in Jimmy McGill. That the fact that he seems to accept his status on the seedy end of the legal spectrum doesn’t suggest comfort or complicity.

No. I want to think that, on some level, he took the money because he wanted to change the fact that he was the kind of lawyer guilty people hire. The money could, as it does, buy him some valuable publicity. It could give him a platform he hasn’t had before. It could get him in front of the right kind of clients.

Buying himself into a living of doing public good isn’t the best way of getting there…but it’s a way.

Of course, we know who Jimmy becomes. What I’m hoping is that it takes him a little bit longer to get there, because nothing would thrill me more than seeing that the slippery slope to Saul Goodman appeared to him as a ladder to a better Jimmy McGill.

Some shows struggle at creating characters. Four episodes in, I wouldn’t blame Better Call Saul if that was the case here. But already these characters are already becoming people.